Some years ago we decided to go on an “adventure”. When passing through Belgrade we noticed some maps of a bicycle track by the Danube. The track starts from the river’s source in Germany and ends in the Danube Delta in Romania.
The Romanian part is mostly composed of county roads. The cyclists share the road with passing cars so we wouldn’t really call it a “cycle path”. From Romania it goes through Serbia, then Hungary. In Hungary, the trail is a dedicated cycle path most of the time. The path is marked with signs and cyclists don’t share the road with cars. People can get maps and tourist information created especially for cyclists. We decided to take this path starting from Budapest to the border with Slovakia. The second plan was Bratislava, maybe even Vienna and back depending on the time.

We did this trip back in 2014 but we still have good memories from the trip so we will try to tell a short story about it here. 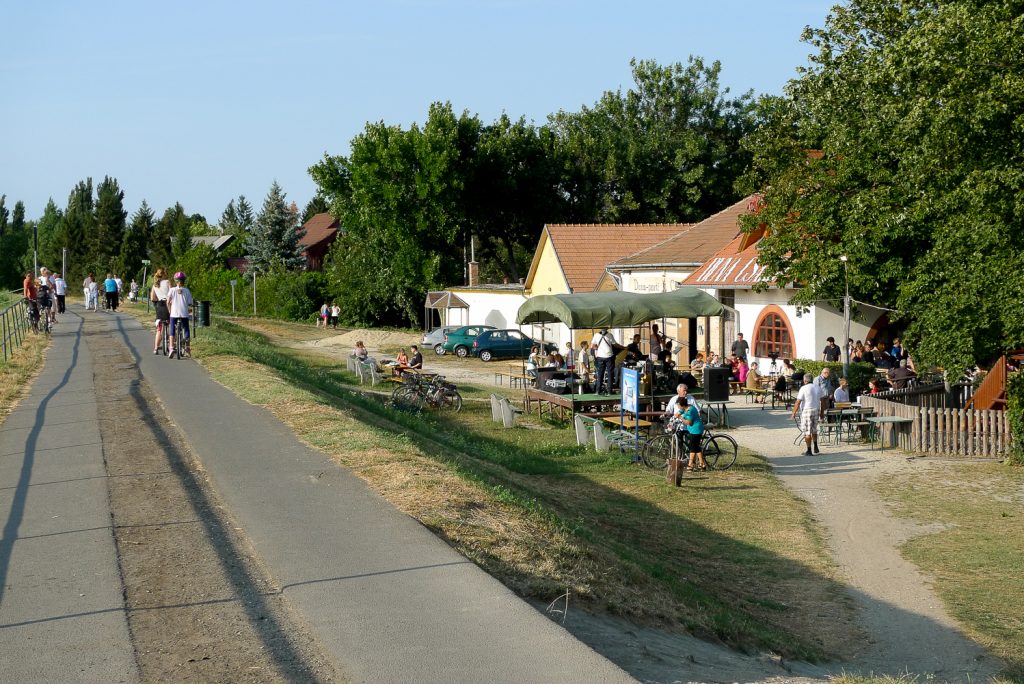 Restaurant on the bike trail

After lots of bike trips through our country, most of them under 100 km long, we decided to try something outside. We noticed maps of this trail in Belgrade one year before and knew that we had to try it. It’s easier to get to Budapest than Belgrade without a personal car and Hungary is more developed so we chose to start here.

The path goes by the Danube through Szentendre, Visegrad, Esztergom. It then crosses the border to Slovakia and goes through Komarno by the Danube to Bratislava. We started in Budapest and went to the North. The plan was to reach Bratislava in two days, maybe even Vienna. The actual path we took is here:

We started in Budapest in the morning. From the bus station at Nepliget we got to the center of Budapest and found the bike path. We were surprised by how well it was marked. We started the GPS and went North. After about one hour we finally got out of Budapest. 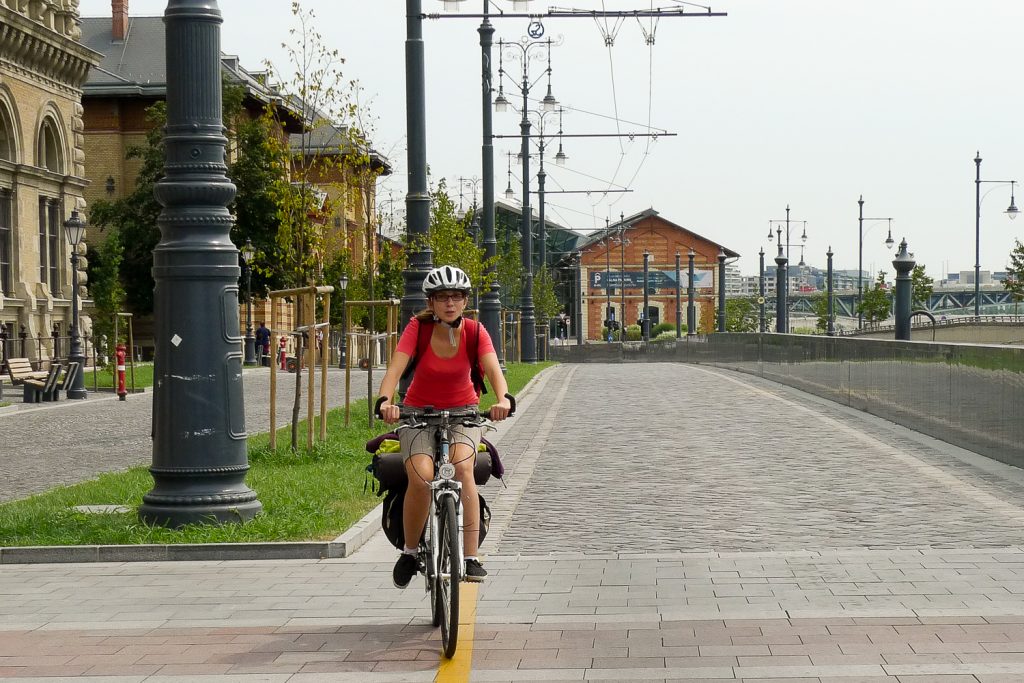 It was the longest part of our journey, Budapest seemed to never end. The track goes on from Budapest on the left bank of the Danube to the North.

The Danube is very beautiful in this region, there are quite a few islands like Margitsziget and Obudai-sziget (still in Budapest) or Palotaisziget. A very big island called Szentendrei-sziget (Szentendre Island) is about 35 km long. On the bank of the Danube, the bike track passes through more settlements or cities. (Dunakeszi, Göd, Vác). 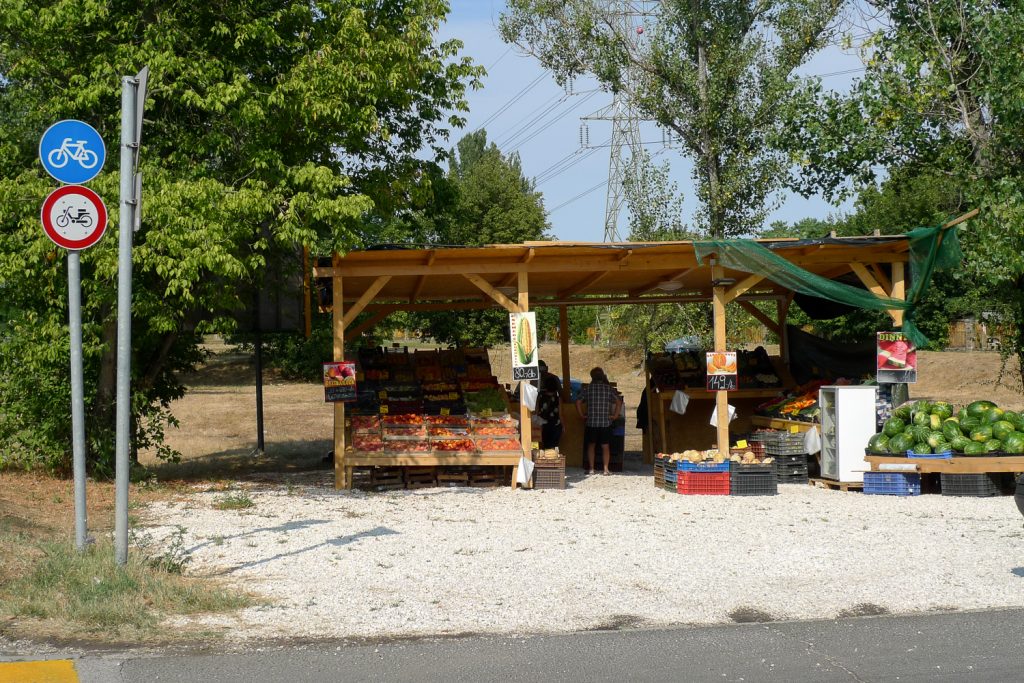 Fruit and vegetable shop at the exit from Budapest

The villages or cities we passed through are small ones, not very modern, where the traditions of the locals can be seen. We passed by a traditional Hungarian party at Dunakeszi with people drinking, eating and dancing on the music of a local band. We had a snack and went on with our trip, planning to get to Sturovo or Komarno in Slovakia by the evening.

The weather was good and the Danube was very beautiful. From time to time, the Danube had beaches on the bank and people did several activities on these beaches. We saw people paragliding, swimming, sunbathing, playing games in the water and so on. The bike path is very well marked in Hungary, distances and directions are given everywhere, even if the path sometimes leaves the Danube bank for a while. 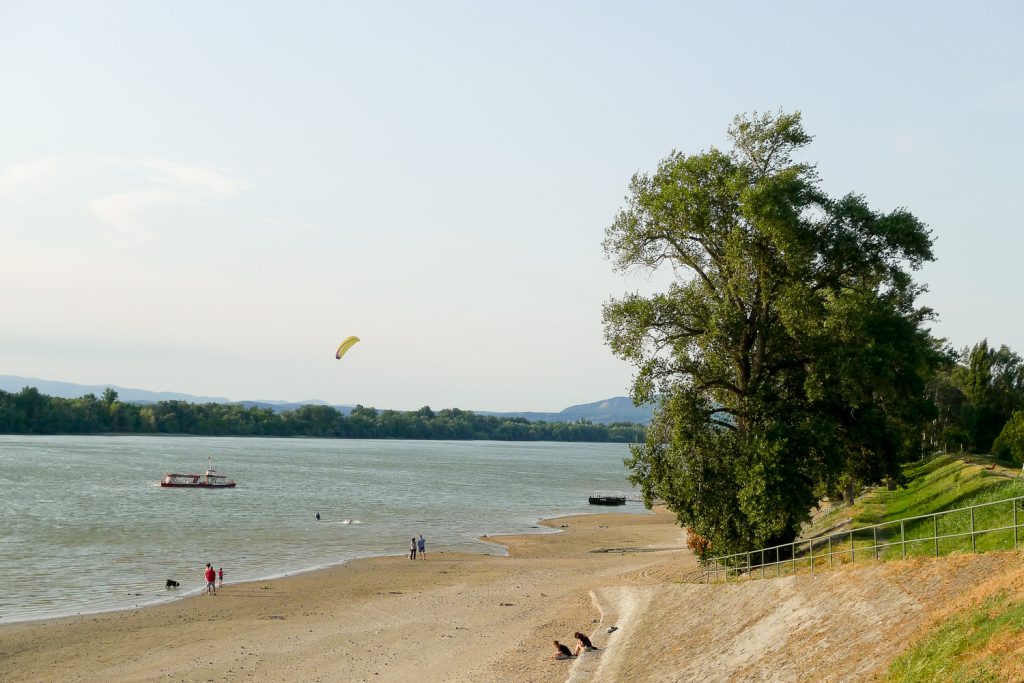 People having fun in the Danube

It all went very well until we got to a place with a ferry crossing which was unmarked close to the border with Slovakia. The path seemed to go on along the Danube and we kept riding on the left bank. The landscape started to change from the natural landscape into a more industrial one but the banks of the Danube were still green. 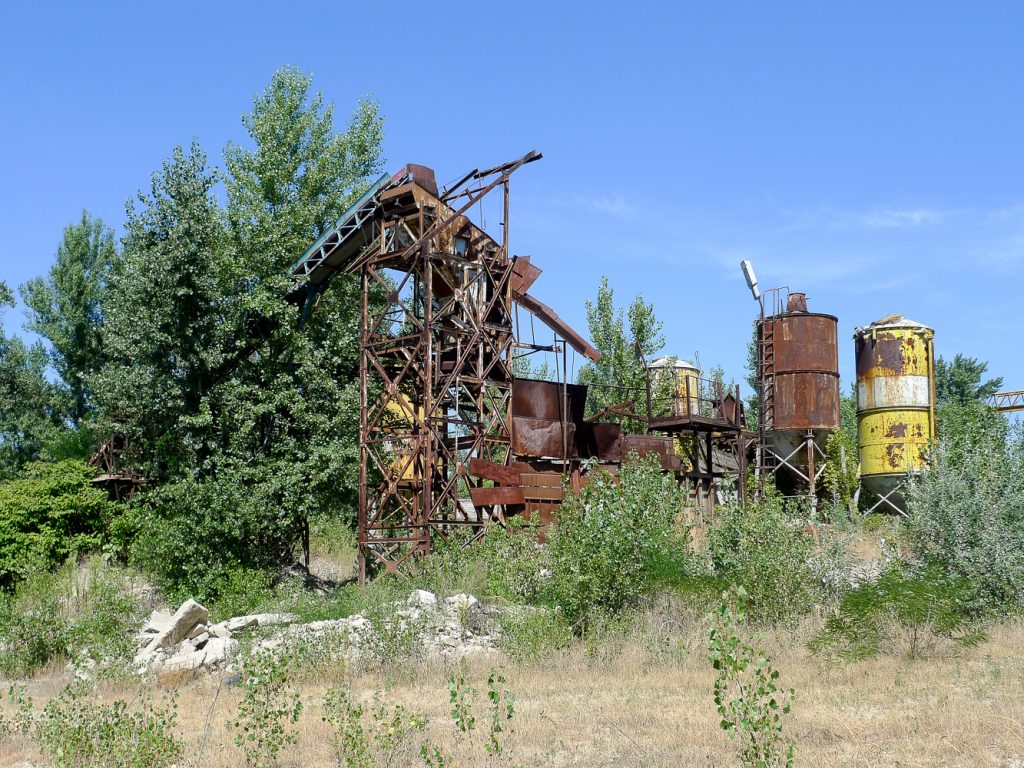 Industrial remains on the bank of the Danube

Once we reached the border the trail ended suddenly at a train bridge, the only place where we could pass to Slovakia. after the bridge the path ended in a forest area and no more signs or information was available. 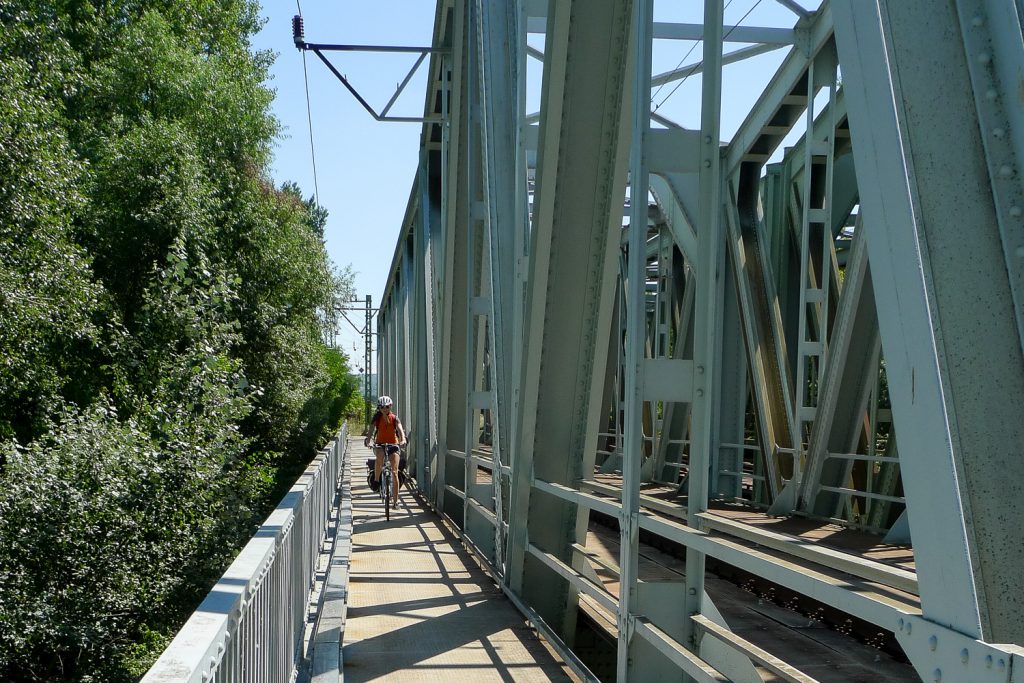 Crossing the border to Slovakia

We figured our way out from the forest and the cornfields and found a road which leaded to the right direction. After another 20 or so kilometers we passed Sturovo and got a flat tire and some other bike problems we could not fix. We came back to esztergom at the border with Hungary. 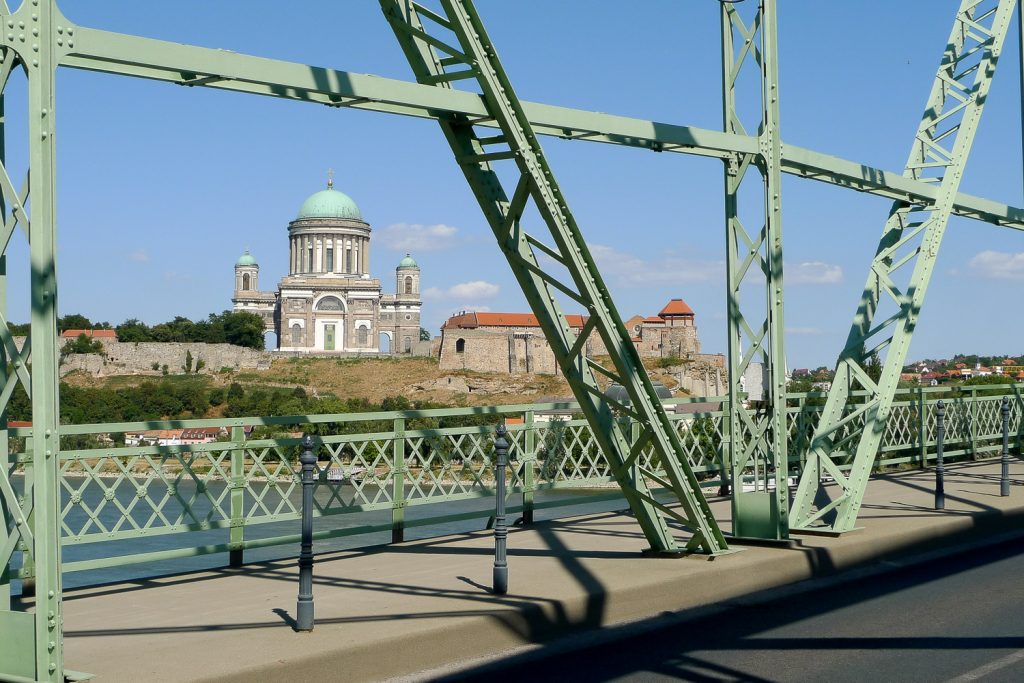 Esztergom church seen from the border

We camped in Esztergom and spent the evening in the hammock on the bank of the Danube and visiting the church/citadel from this city. 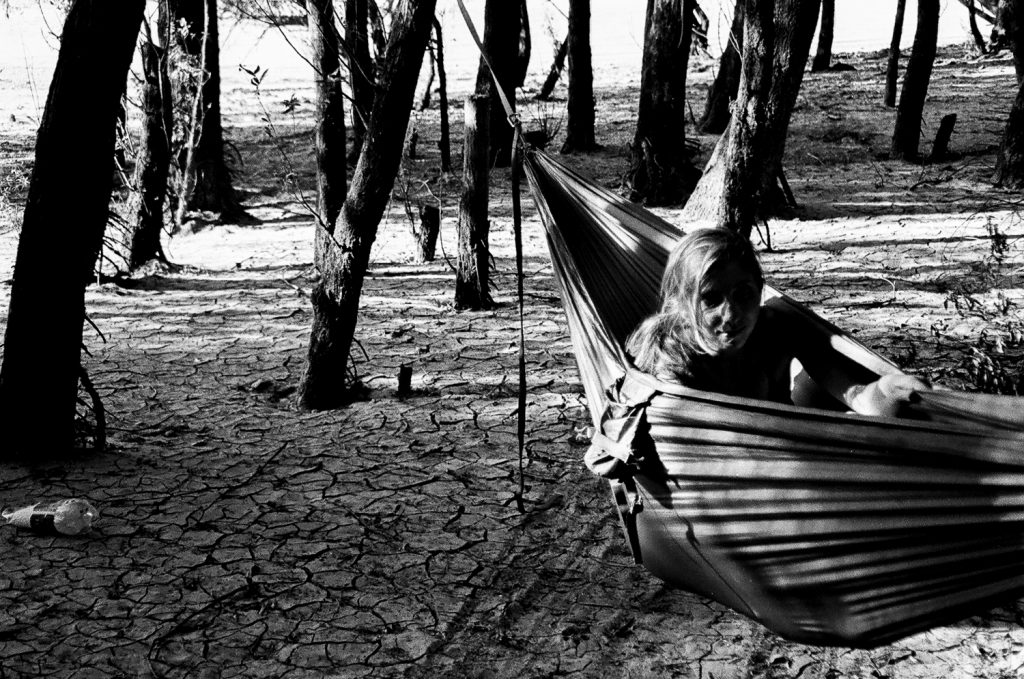 The next day we took a train to Bratislava and left the bike to someone to fix. Slovakia is not my favorite country and there’s not much I can write about our one evening experience in Bratislava. We stayed in a nice colored hotel, had some drinks in the center and visited the castle but we didn’t have time for other things. 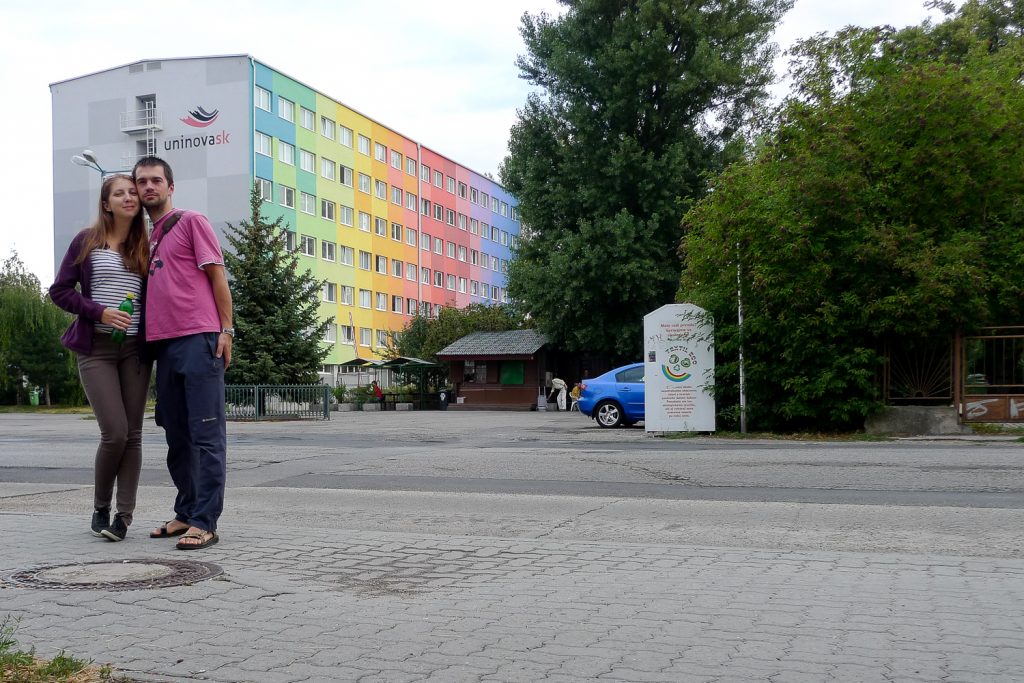 On the way back we figured out the place where we should have crossed the Danube with the ferry. The bike path continued on the other side rather than ending in a corn field but we missed that. We decided to take the direct route on the national roads and visit Visegrad and Szentendre rather than going back on the same path by the Danube.