If you pass through Southern Italy, Polignano a Mare is almost certainly a place to visit. This old town is probably the most spectacular seaside resort at the South of Bari and also a very beautiful town. The town is located on the Adriatic Sea in the Metropolitan City of Bari, Apulia, southern Italy. The town is built on top of high cliffs and houses seem to rise directly from rocks above the sea. The center of the city has a bridge crossing right above the main gulf and beach and hence offers a great view of the seaside.

The city on the rocks – Polignano al Mare

Location and getting there

Polignano a Mare 40.972100, 17.192300
Polignano a Mare is a town from Puglia, about 30 km from Bari and 100 km from Brindisi. The town is built on stunning limestone rocks which seem to be coupled with the ancient houses right on top. The marvelous views from the center of the town are like a magnet for tourists that fill the town and the beach all the time during the summer. The center is filled with houses connected by narrow stairways and streets in classic Mediteranean style. The town is mentioned in history during the Greek and Roman empires and historical evidence still exists through the town. However, the beach in the center is not very comfortable because it is made of rocks combined with rough sand, not fine sand. Hence, sunbathing is difficult and so is getting in and out of the beautiful azure water. However, once you got inside you feel like you are swimming in one of the azure mythical bays from fantasy movies. 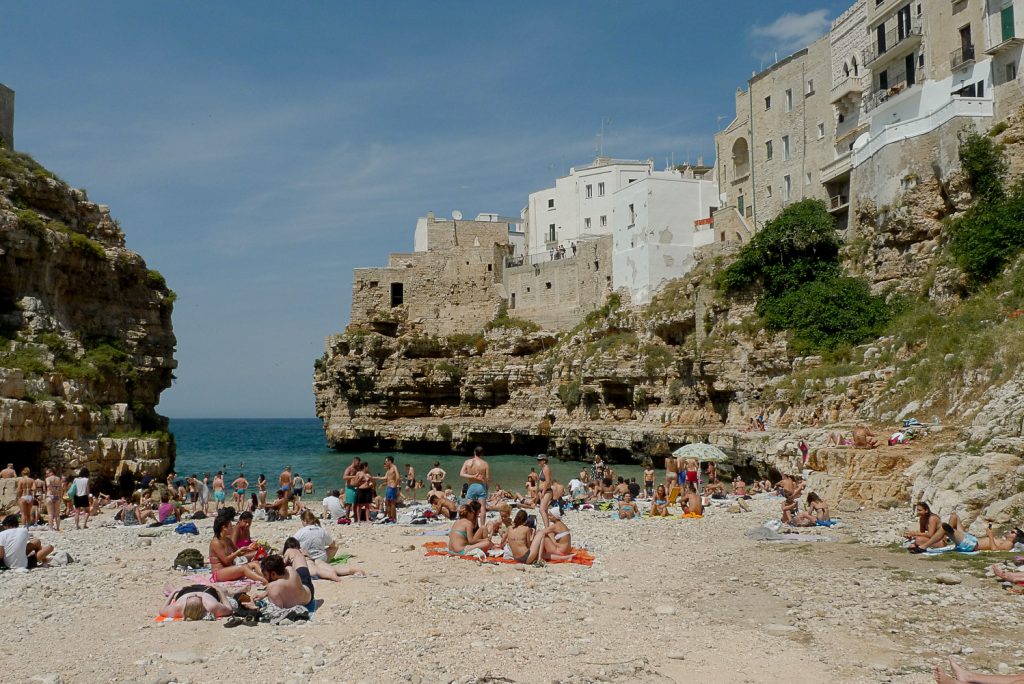 Tourists on the Polignano beach

I had the chance to bike from Brindisi to Polignano a Mare on the 27th of August 2016. The route went through numerous olive plantations and offered spectacular views towards the Mediterranean sea. I went there with some friends because of the Cliff Diving World Series 2016 organized by Red Bull. The 90 km bike ride on the seaside isn’t the ordinary weekend ride but the road is almost flat and has little traffic. After about five hours we arrived at the place. Two jumping platforms were built on the cliffs above the sea for the contest. Sportsmen and women jumped in the sea from these platforms in most spectacular ways.

The area across the bay was full of people watching and capturing the jumps or just enjoying the sun. Since this was probably the best place to see the jumps, I tried to capture some of the moments from there. The beach is a bit far away from the other side where the platforms were built. I had one of the best views at the jumps from here, crowded between other people.

You can see some pictures from the event here: