Auschwitz. What and where?

Probably there are few people in this world that didn’t hear about the Holocaust and Auschwitz. During World War II, Adolf Hitler’s Nazi Germany aided by its allies and collaborators systematically caused the death of around six million Jews. Around two-thirds of the Jewish population of Europe died  between 1941 and 1945. Other “undesirable groups” of people, like the Roma, homosexuals, Jehovah’s witnesses were also persecuted and murdered during the war.

Poland is full of historical evidence of these actions, some of the biggest ghettos, concentration and extermination camps are located here. A concentration camp is a place where thousands of  “racially undesirable” people were held in awful conditions without some primary needs like healthcare or enough food, put to hard labor and mistreated. Later on, starting from about 1941, some camps were designed specifically to allow for killing massive groups of persons in gas chambers.

We decided to visit the most well-known concentration and  extermination camp named Auschwitz. The camp is located about 70 km West of Krakow, in Southern Poland.

Us and some friends decided to take a guided trip to get there rather than renting a car. As this is one of the main tourist objectives close to Krakow, there are dozens of agencies organizing daily guided tours all around the center of Krakow that do this. We just picked one that seemed serious named Krakow tours that offered a guided trip for about 25 Eur per person. In about one hour and a half we were in front of the museum. I think everyone has seen the infamous gate with “Arbeit Macht Frei” written on it (work makes you free) from the entrance of the ghetto in a movie/picture. Here it is, at the start of our tour. 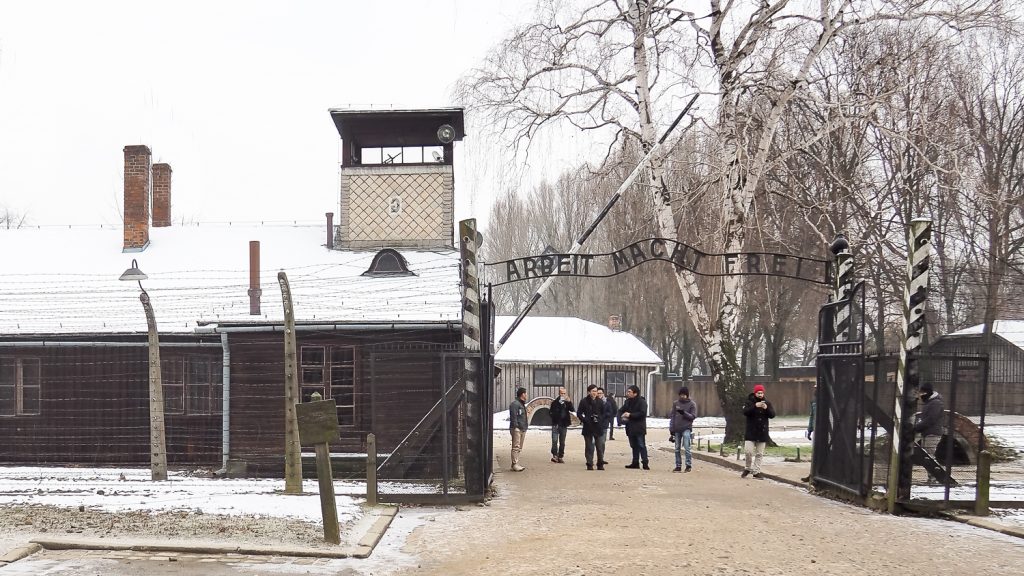 Auschwitz. Into the museum.

We got past the gate and two rows of barbed wire that were electrified during the past. Tourists can see the concentration with streets surrounded by identical blocks where the inhabitants were held. Our visit there was in a cold foggy winter day that added to the somehow creepy experience. 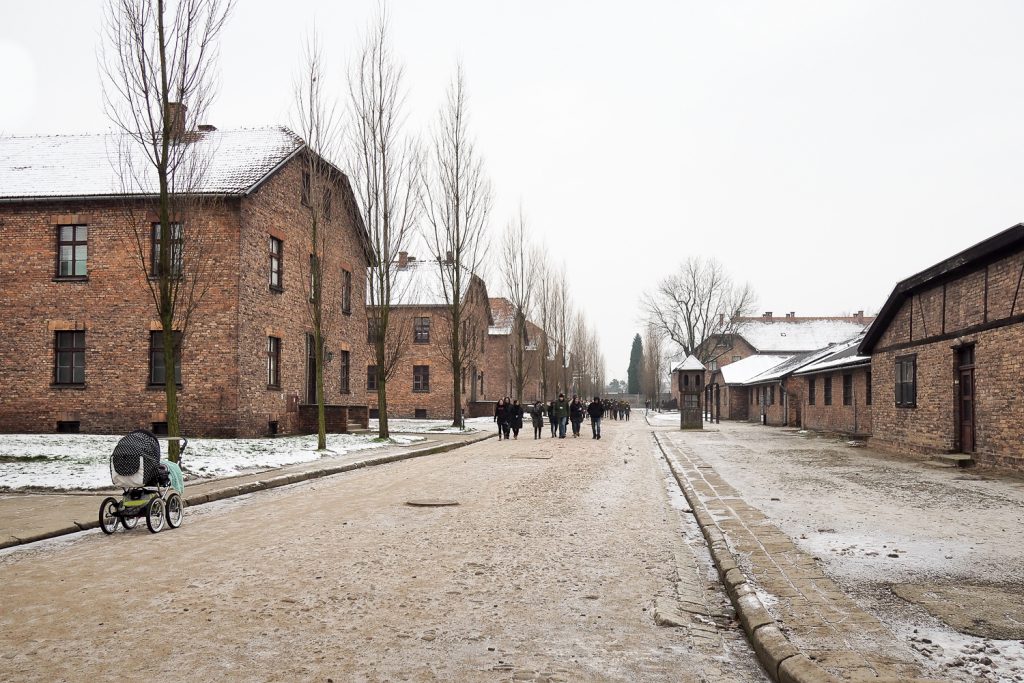 Blocks for inhabitants of the Auschwitz concentration camp

Some of these blocks are designed as a museum to show how more than one million inmates were brought, held, tortured or killed here. The guide started by showing us the places where the prisoners came from. The places include most European cities, even our city in Romania was listed on the map. 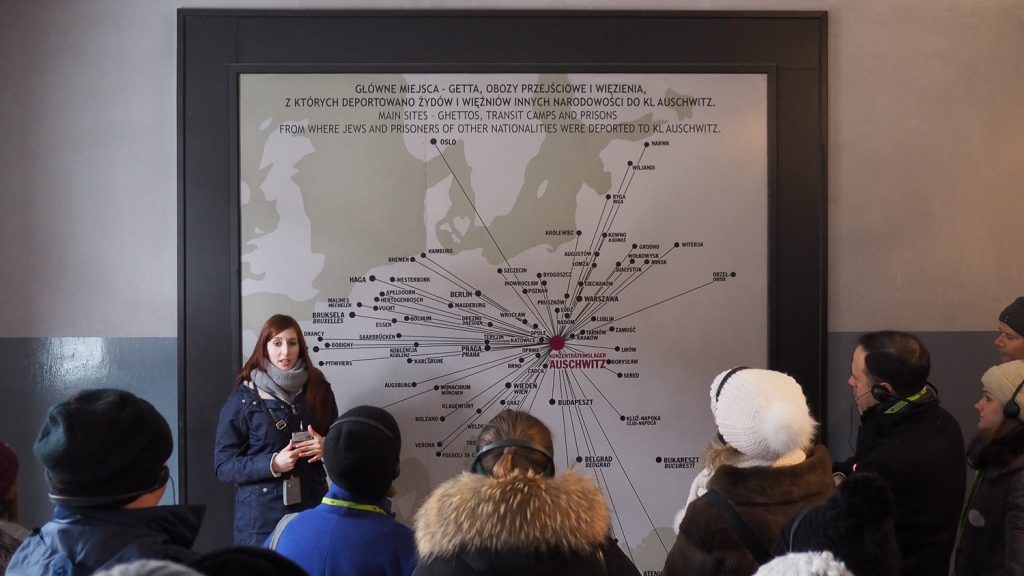 The tour goes on putting a lot of emphasis on how the Jews (actually, there were also Romani/gypsies, Soviet prisoners of war and Poles but everyone only talked about the Jews) were brought there against their will, held in precarious conditions, left to starve or die of diseases, put to hard work and such.
The next rooms show possessions of the people that lived and died in the camp. The tour is built as a story, starting with pictures of people and the period they spent there and bags with which they came. 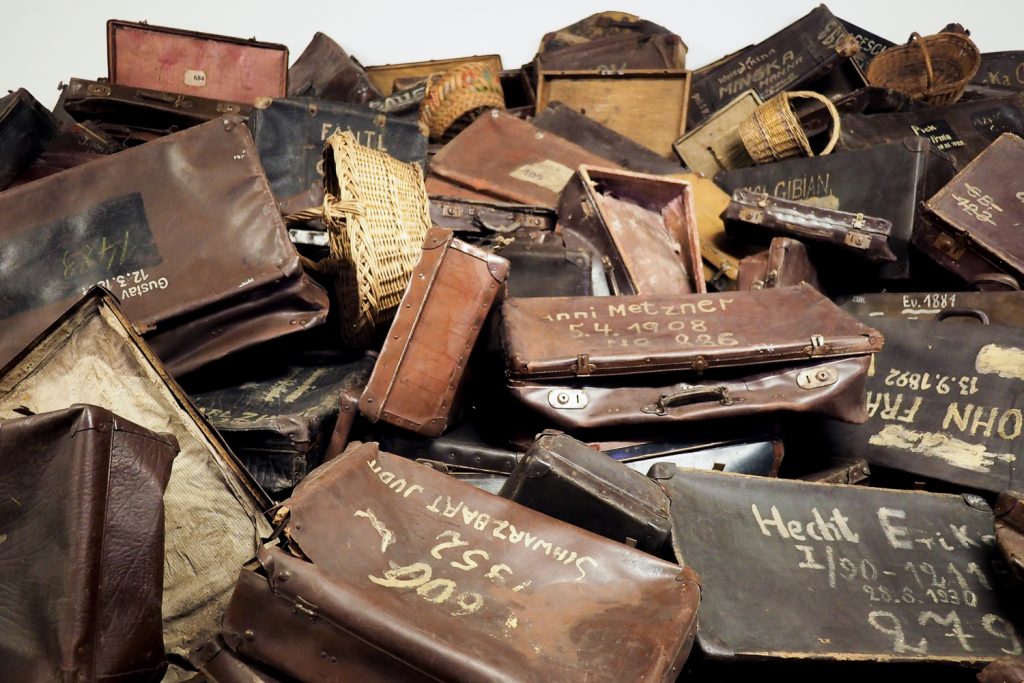 Bags from the people that arrived in the camp

Another exhibit room shows shoes from the people who died here. 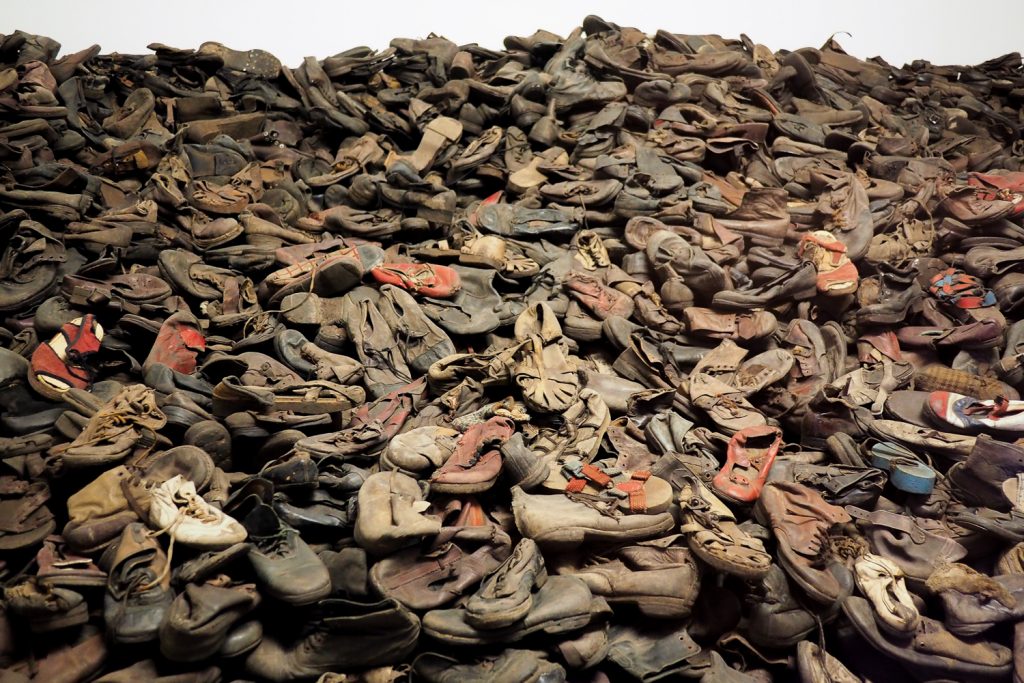 Shoes from the people that arrived in the camp

A room full of dishes, cutlery and other tools are gives an idea of the number of people that ended their lives here. 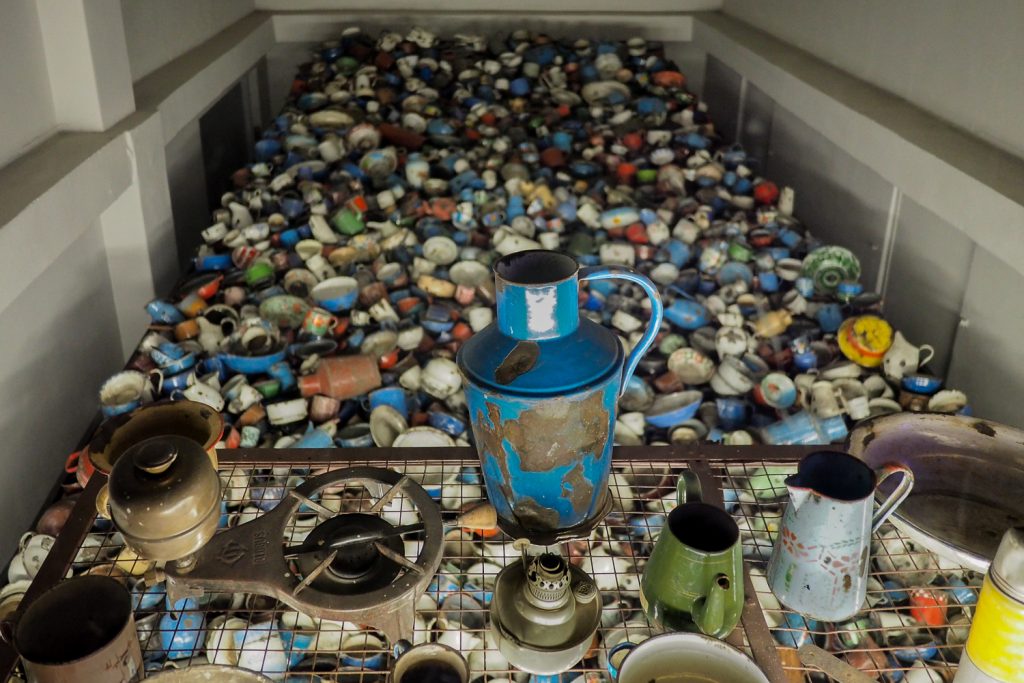 Dishes and tools from the people that arrived in the camp

Besides all these there are texts that seem designed to frighten and horrify the tourists. First, people came here with the personal labeled bags but everything was confiscated. The shoes in the exhibition belong to all the people killed in the camp. Other pictures and texts impress with the stories told or shown.

The guide lead us to to rooms focused on how the extermination of the people was done. We could see models of the gas chambers, empty cans of gas, ashes of the cremated people and hair of the dead among the exhibits. The exhibits give quite a good impression on the way the people died there. 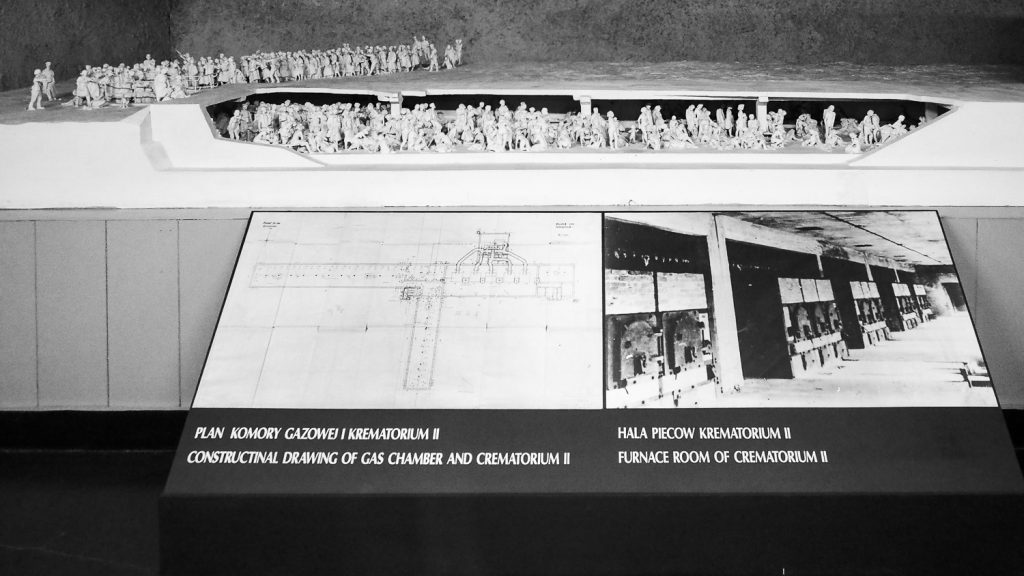 Model of the gas chambers in Birkenau

We saw all the pictures and read about the killing, it’s time to go on to Birkenau, the extermination camp. We went out from the camp towards the second extermination camp and passed through the barbed wire fences once again. we could imagine how the guards were walking there keeping an eye on prisoners at all times. 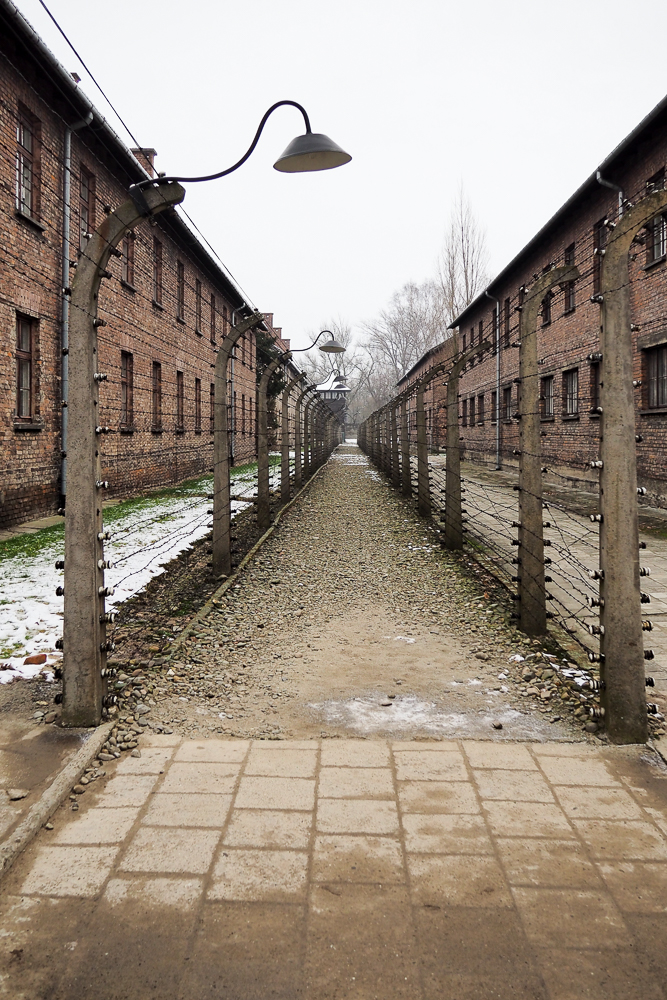 Between the barbed wire fences in Auschwitz

Auschwitz II–Birkenau is a camp that was specifically designed for extermination of undesirable people. Nazis brought Jews and other people were here from early 1942 until late 1944 with trains from all over German-occupied Europe. The train lines leading directly to the extermination camp give a clear idea on the massive number of people that ended here. 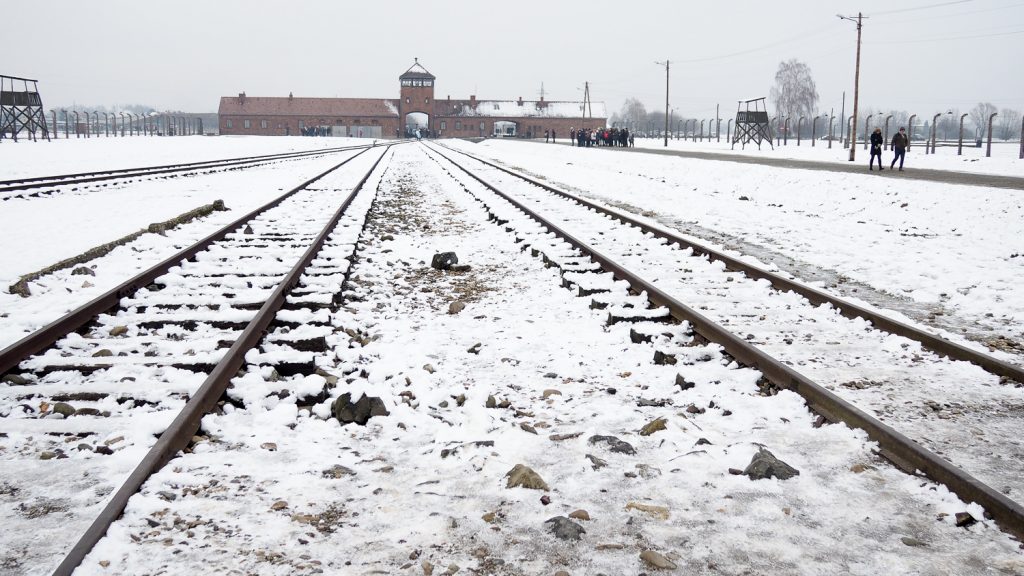 Once inside the camp, we could see some young Jews carrying the flag of Israel. They were probably commemorating the dead from their nation. 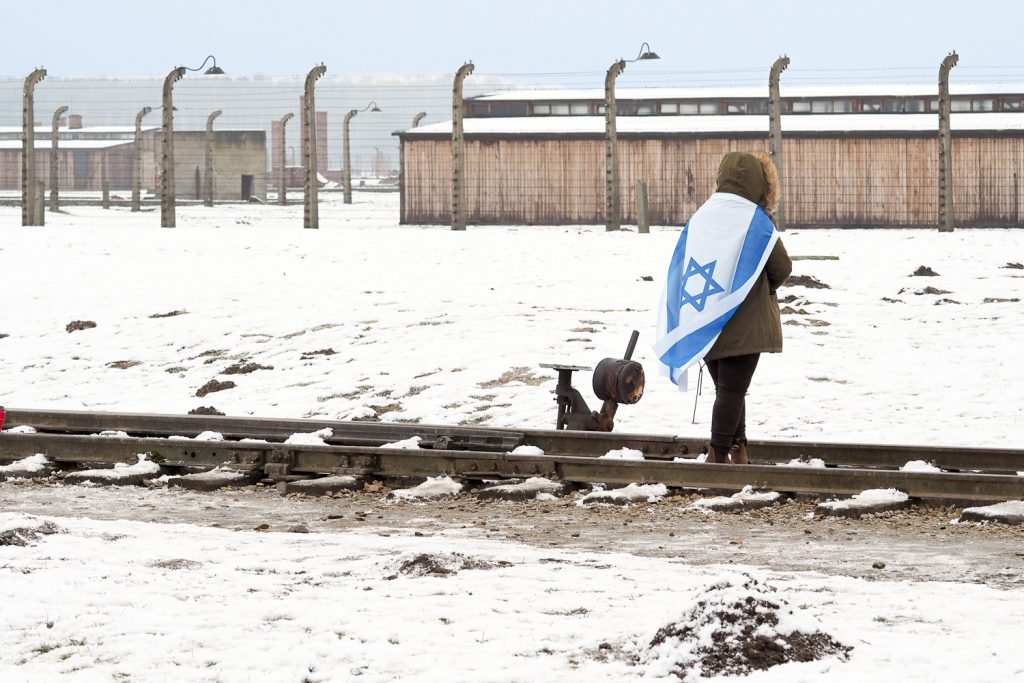 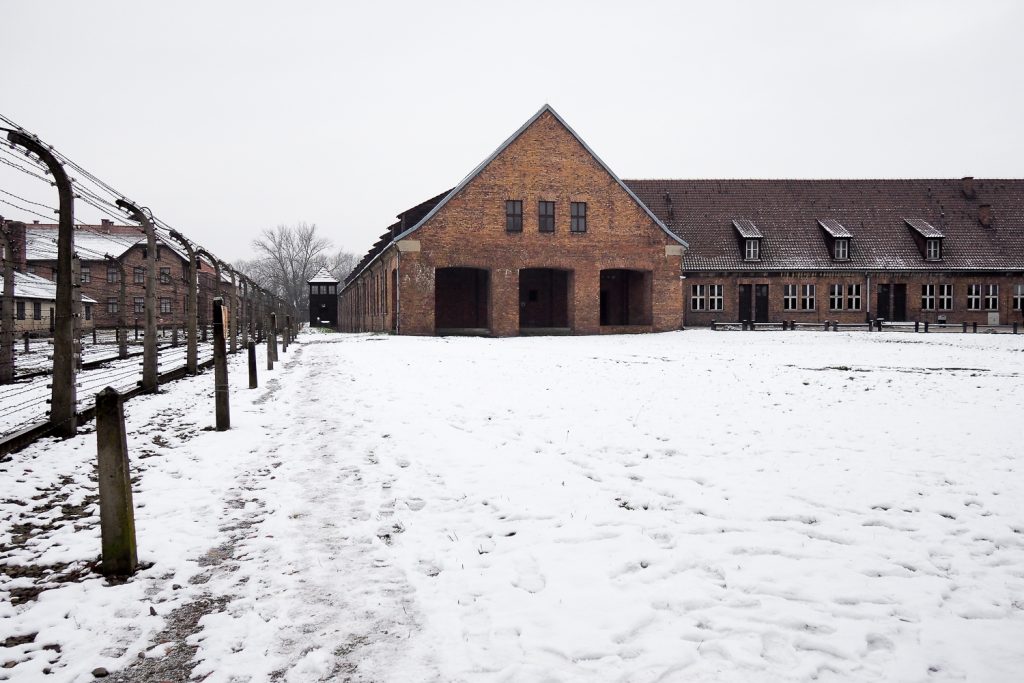 Tourists  see one of the wagons in which people were brought here behind the gates. Of course, the guide presented the wagon here along with stories on how people died traveling for days without light and air, crowded and not being able to sleep… 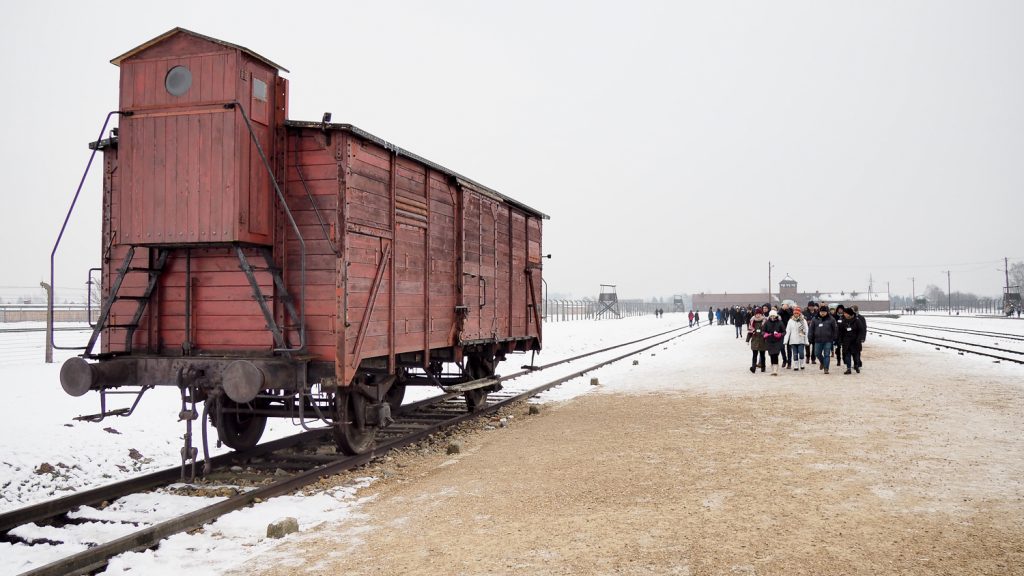 Wagon used for transportation of Jews to the camp

We go on by a monument listing the number of people of each nationality that died here to the (mostly destroyed) gas chambers. We can see the next large area full of burned down buildings (similar to some barns).
After a long walk, we get to a gas chamber and a crematoria restored to give an idea on how they looked. Our group entered rooms where the nazis  kept before sending them to death. By this time, we had already walked more than one hour hearing the stories of how people died here, we didn’t even feel like taking pictures anymore. The guide gave us an invitation to see the souvenir shops outside the museum at the end of the tour, and that was the end of our experience. 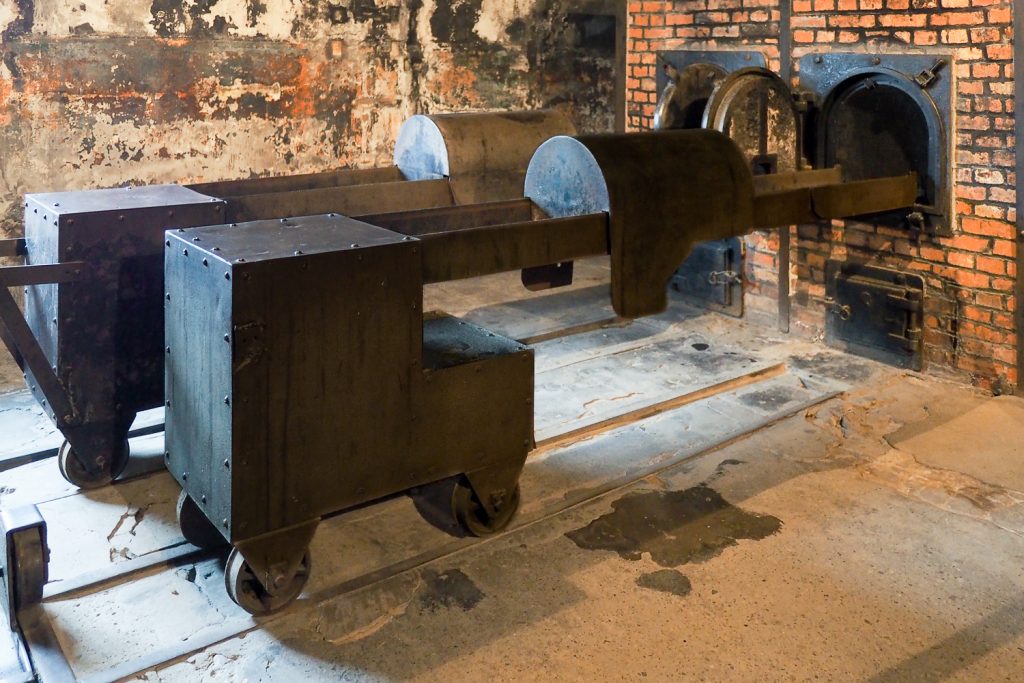 After leaving Auschwitz we had mixed feelings. On one hand, what happened there was horrible, we agreed with the guide and all the stories in the tour.
On the other hand, the Holocaust is a thing of the past, not relevant in the current historical context. We can see mass murders in different countries happening now. Massive exterminations still happen during our times but are not as close to us and not as publicized. The museum of Auschwitz was, as many other museums are nowadays, focused on the commercial aspect. Everybody had to do a daily tour here from Krakow. Souvenirs are everywhere around the camp. The stories are sad and horrifying but there is more information in a documentary or a book than here.
Auschwitz was a “must do” experience for us but there are many other places that offer more satisfaction than this. If you go on a vacation in Poland, do not spend more than a few hours here.