Budapest is the capital and the most populous city of Hungary, and one of the largest cities in the European Union. The capital has two sides, Buda and Pest, stretching along the banks of the Danube. Even though they are part of the same city, the sides represent two different faces of the city. On one side Buda has its historic castle district, medieval streets and houses, museums, caves and Roman ruins. On the other side, Pest beholds the largest parliament building in Europe, riverside promenades, flea markets, bookstores, antique stores and coffee houses. The former Austro-Hungarian Empire has left its heritage all over the city.

How to get to Budapest ?

It’s very easy to get to Budapest with any kind of transportation method, even by boat.
If you plan to take the plane there are two international airports just outside of city and several low-cost airlines with great offers and services fly from here.
Also,the train is another good idea because Budapest has direct railway connections with 25 European capital cities.
If you want to reach the city by boat, an hydrofoil service operates between Budapest, Vienna and Bratislava between April and October.

We’ve been to Budapest many times and we put toghether alist with 10 things we loved to do in Budapest. Enjoy!

Buda Castle (Budavári Palota) is the palace complex of the Hungarian kings in Budapest, first completed in 1265. The massive Baroque palace built between 1749 and 1769 is a part of the Budapest World Heritage Site.
Buda Castle sits on the southern top of Castle Hill, bounded in the north by what is known as the Castle District (Várnegyed), which is famous for medieval, Baroque and 19th-century houses, churches and public buildings. 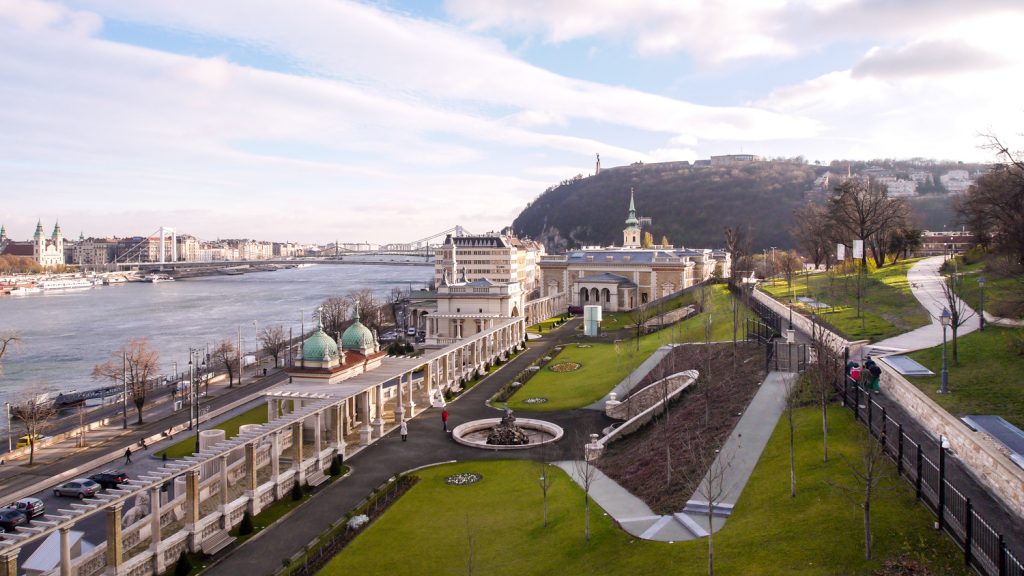 Budapest Castle gardens in the spring

The Castle Hill Funicular links the Castle hill to Clark Ádám Square and the Chain Bridge. A trip with the funicular offers great views over the Danube and the city and is a must.
The Budapest History Museum is located in the southern wing of Buda Castle. It presents the history of Budapest from its beginnings until the modern era.
The changing of the Guards in front of the Hungarian Presidential Palace (Sandor Palota) is one of the Buda Castle attractions. The palace of the Hungarian president is right next to the Funicular Railway and the huge Turul bird statue. 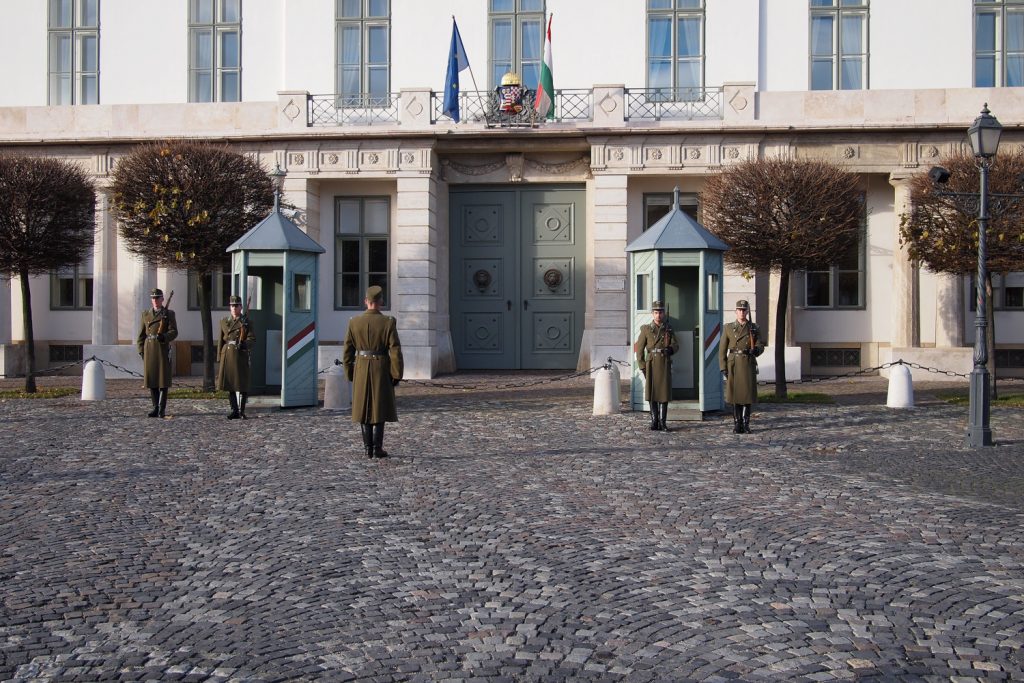 Changing of the guards in the Buda castle

During winter, there is a section of the Hungarian Christmas market in the Buda Castle garden and you can enjoy hot wine or tea. During summer you can enjoy the great gardens full of colored flowers.

Hungarians cook dishes primarily based on meats, seasonal vegetables, fruits, fresh bread, dairy products and cheeses. The most important spice in the Hungarian cuisine, named paprika is found in almost any dish.
The goulash respects the authentic rules and consists of a stew of meat and vegetables, seasoned with paprika and other spices. 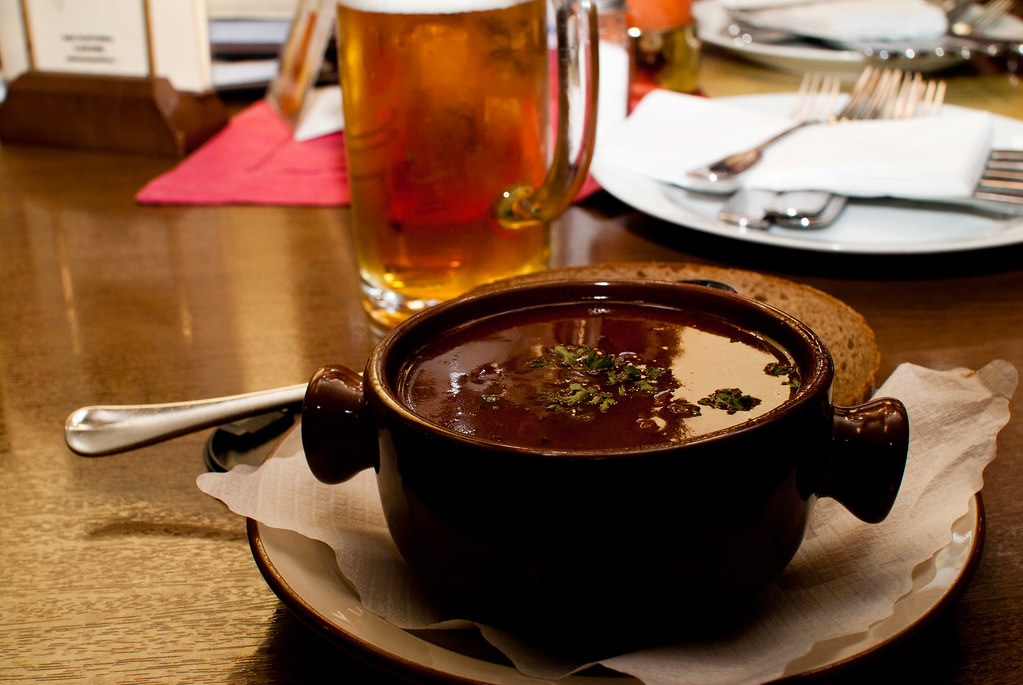 You can also try the paprikash, another Hungarian dish which is also on our preference list. The paprikash is a thicker stew with meat simmered in thick, creamy, paprika-flavored gravy.

One of the best places you should visit in Budapest is the Fisherman’s Bastion. The bastion is a terrace in neo-Gothic and neo-Romanesque style situated on the Buda bank of the Danube. Frigyes Schulek elaborated the plans and built the bastion between 1895 and 1902.

From the towers and the terrace of the bastion there is a panoramic view of Danube, Margaret Island, Pest to the east and the Gellért Hill. 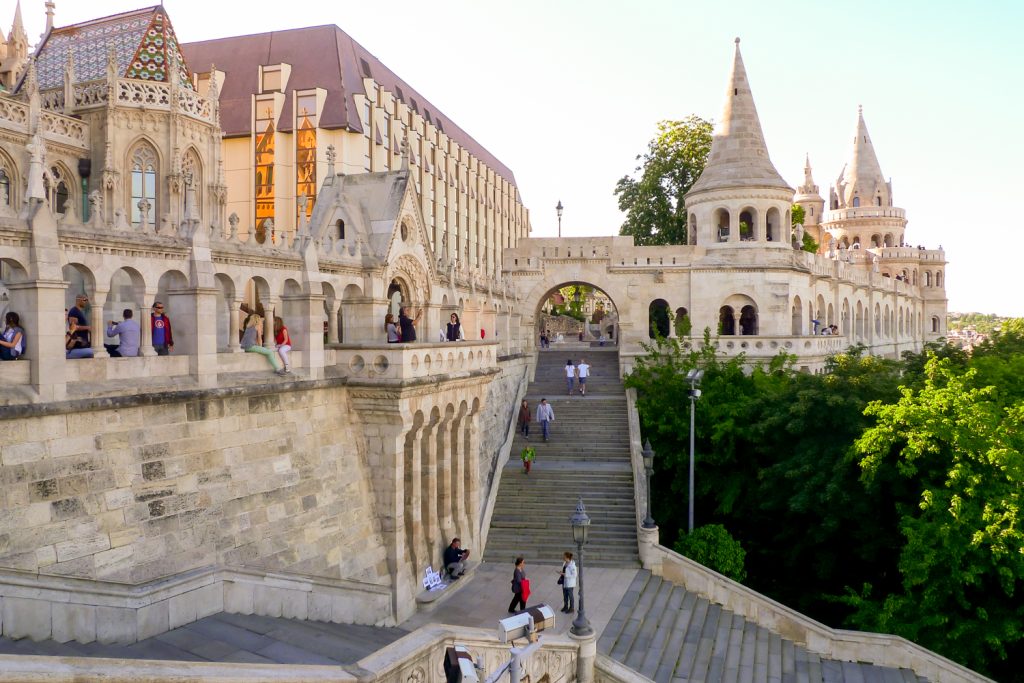 Nearby, the spectacular Matthias Church hosted several coronation ceremonies, royal weddings and baptisms and witnessed many turbulent events of Buda. The Roman Catholic church is also known as Church of Our Lady (Nagyboldogasszony templom). King Béla IV founded the church after the Mongol invaders left Hungary in 1242. 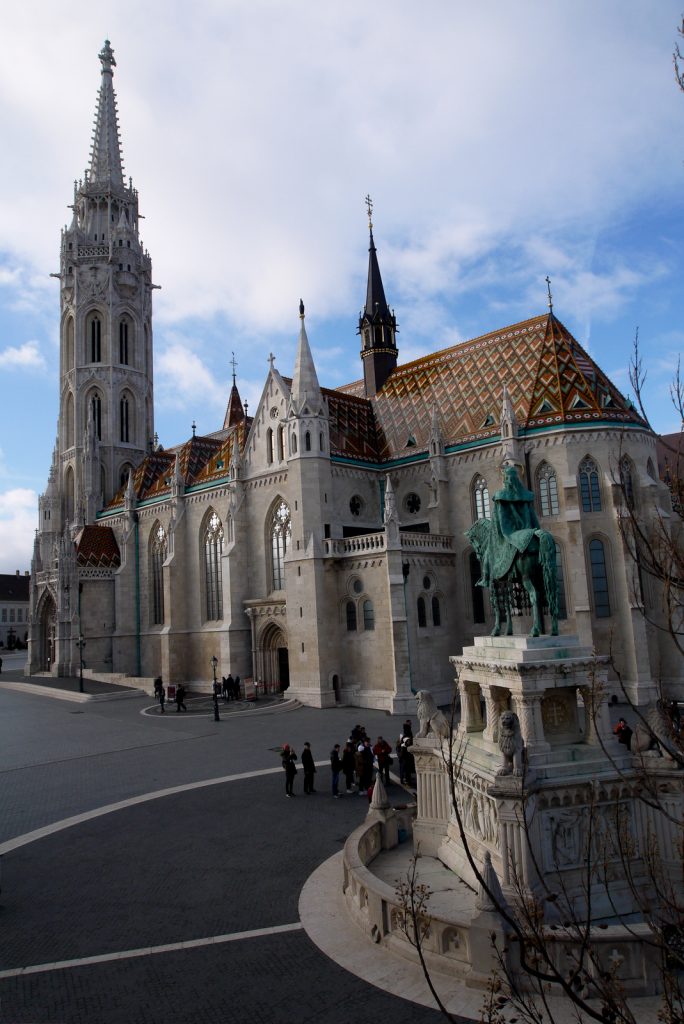 The largest church in Hungary is built in dedication to its first king, St. Stephen.
It houses Hungary’s most sacred treasure, St. Stephen’s mummified right hand, the Szent Jobb (Holy Right Hand).
For a small fee, you can go up the cupola and take in the view of whole Budapest from above.
The front of the basilica is one of the locations of the Cristmas Fair starting from November. 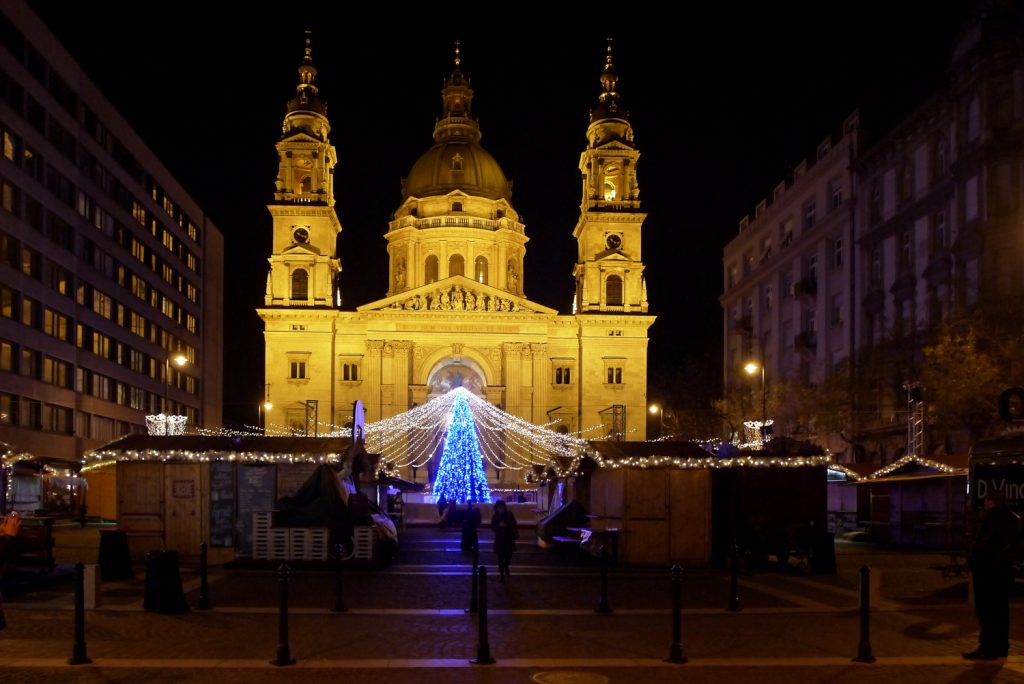 5. Cruise on the Danube

Several companies offer different types of cruises on the Danube. You can get all knids of thematic cruises: wine tasting, dinner, night, evening, cocktail, etc.
You can get an idea of what a cruise has to offer from a website like Budapest River Cruise but we always recommend buying tickets on the spot. Plans may change, there is no way to find all the offers on the internet and you can get lucky and find a special offer when you are there, who knows? 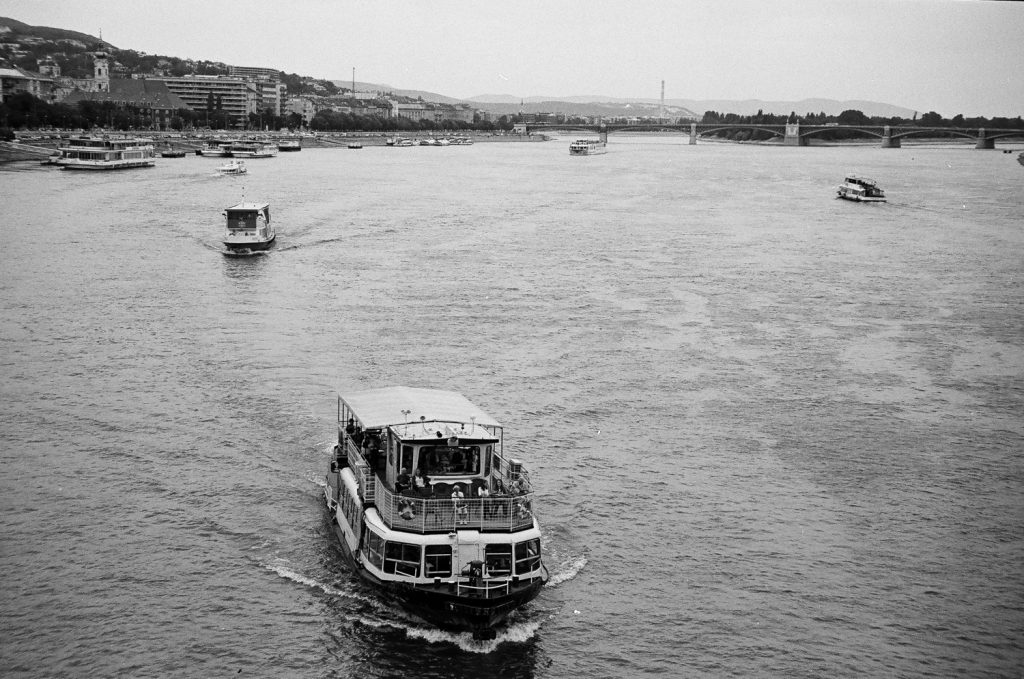 Cruises on the Danube in Budapest

We discovered the Memento Park, a place where all the communist statues were moved after the regime fall, just outside Budapest.  You can get a bus from “Kelenfold vasutallomas – Metro 4″ (BUS No. 101B, 101E and 150) to Budateteny vasutallomas (Campona) (or use a car and a GPS, your choice).
The park opens at about 10 am and stays open until the evening. You can easily spend a few hours admiring the old communist statues taken from Budapest after the fall of communism in 1989. 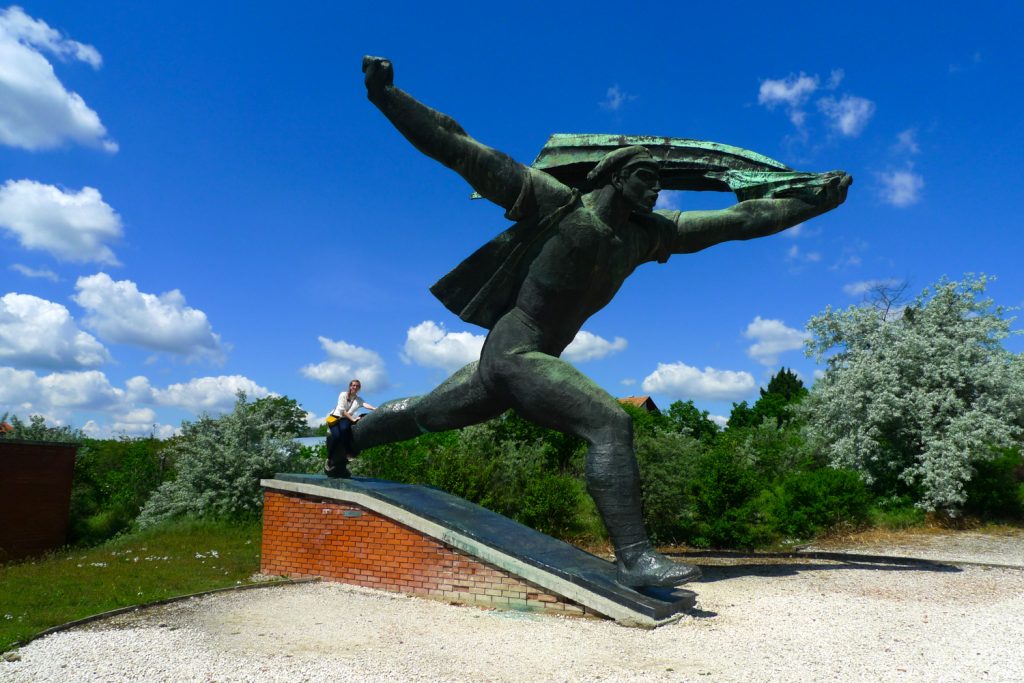 Margitsziget is a quiet and peaceful getaway from the noisy agglomeration of the city. It is an island with a very large park, walking areas, trees, some medieval ruins for the history passionate, musical fountains for people who want to relax, sports complexes and even clubs for people who want to party at night. It is best to visit the island in the spring when the vegetation is in bloom or in the summer if you want to take a bath in one of the available swimming pools or relax in the sun. You can rent bikes or quadcycles for several people and ride around the island. You can stop and have a drink in several places. The island does not offer much during the winter .

8. The house of terror museum

Terrorhaza (the house of terror) is a museum in the center of Budapest dedicated to the victims of the holocaust. You can find three floors with presentations of different aspects from World War II, the invasion of the Soviets and even the Revolution in Hungary. Also, you can watch movies, see exhibits and presentations related to different events, you can learn about the deportations, the gulags and the Soviet communist regime that affected most of Europe until 1989. In addition, you can find different temporary exhibitions and special events if you are lucky and you can even see a real tank in the interior courtyard. This museum is different from most other museums you’ve seen and it’s a must. 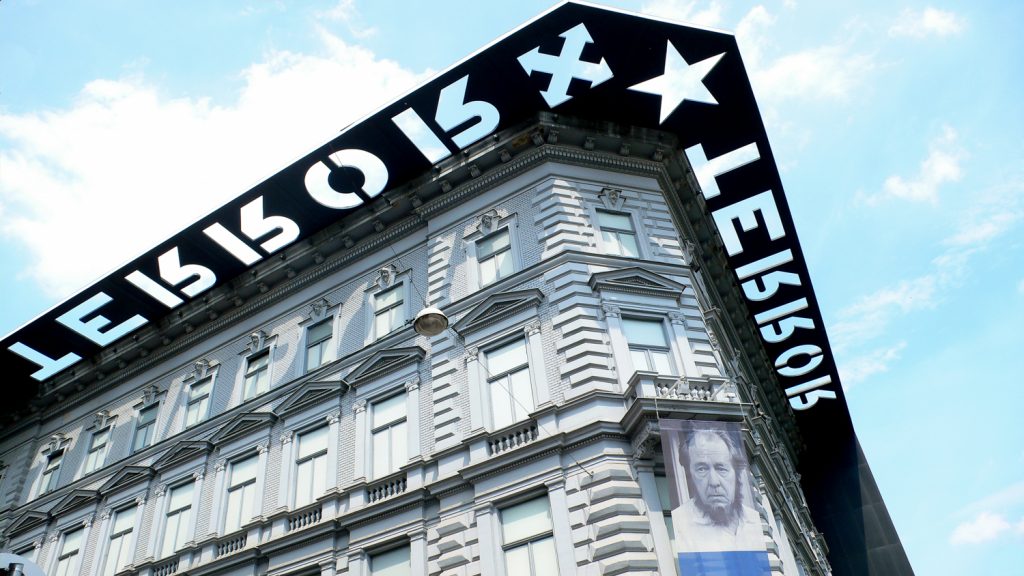 Romans enjoyed Budapest’s thermal waters as early as the 2nd century, but the bath culture really started flourishing only during the Turkish occupation of Hungary in the 16th century.
There are about 125 thermal springs under the Budapest soil.
You can go to one of the public baths or book a hotel with spa services included. The most popular thermal baths are Szeckenyi Thermal Baths and Gellert Spa. 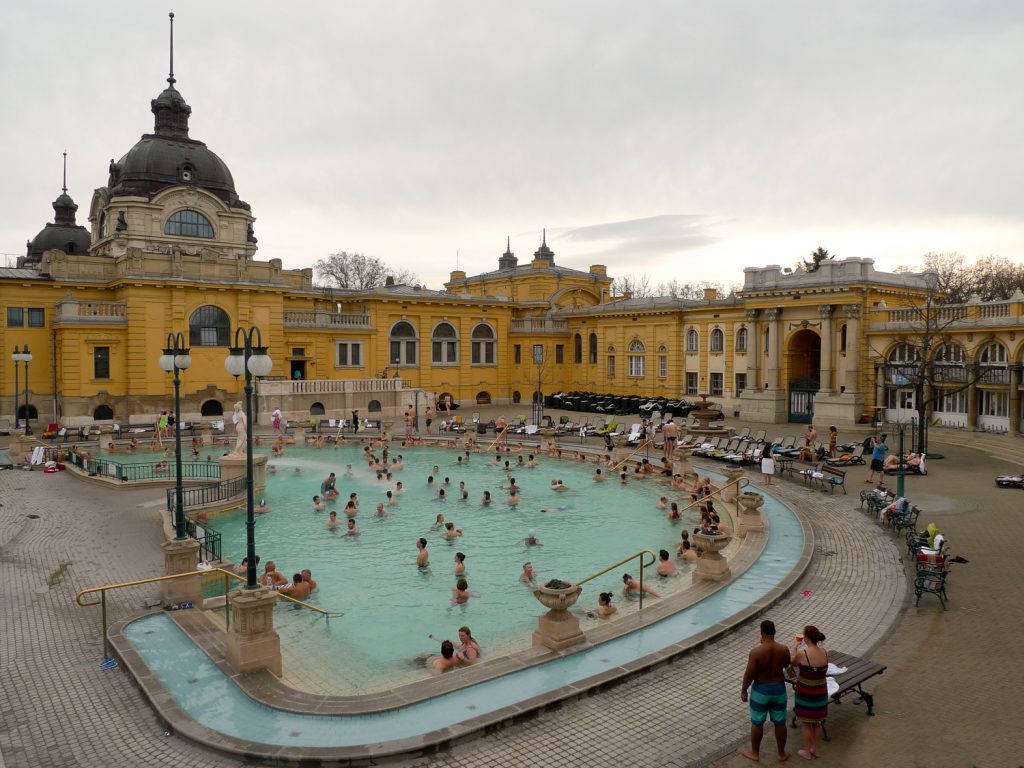 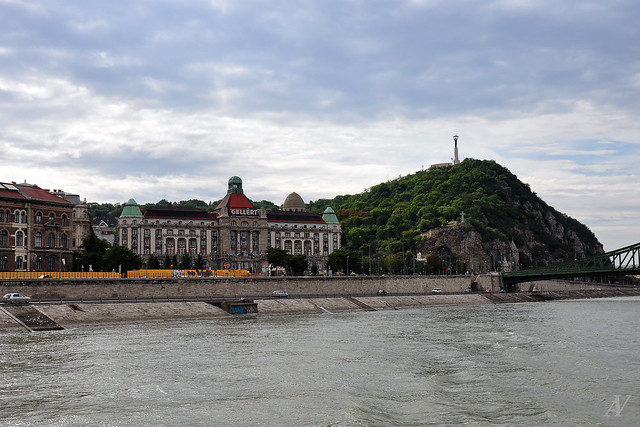 Vajdahunyad Castle is located in the City Park of Budapest.  The castle, built in 1896 during the Millennial Exhibition, is a unique blending of many different architectural styles: Romanesque, Gothic, Renaissance, and Baroque.
Today, it houses the Museum of Hungarian Agriculture, the biggest agricultural museum in Europe. 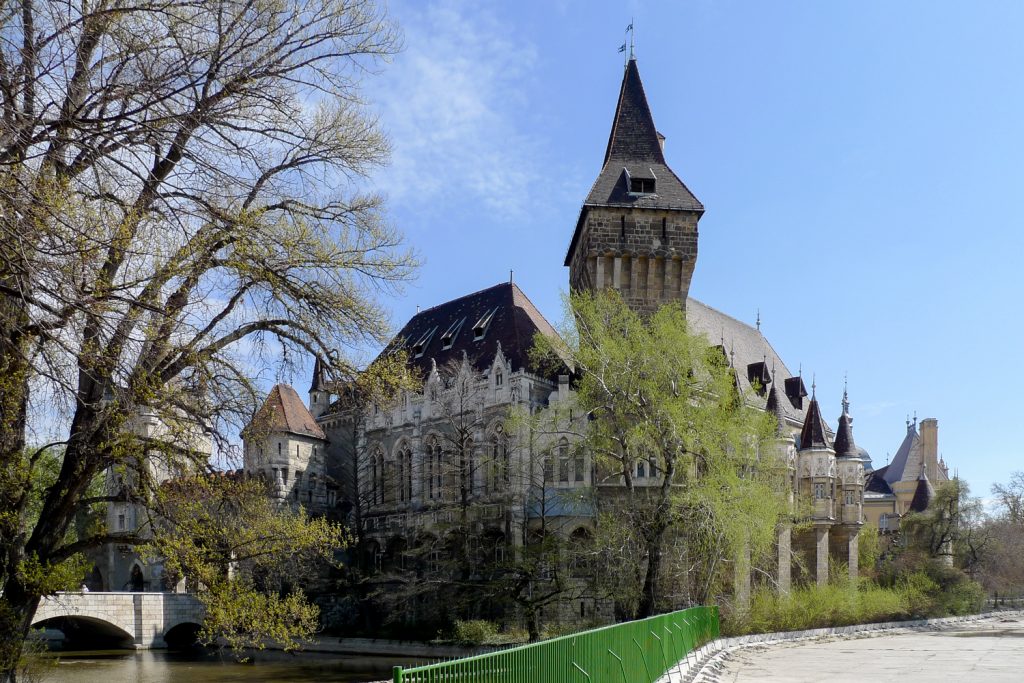 Another attraction in the castle court is the statue of the chronicler Anonymus (by Miklós Ligeti). 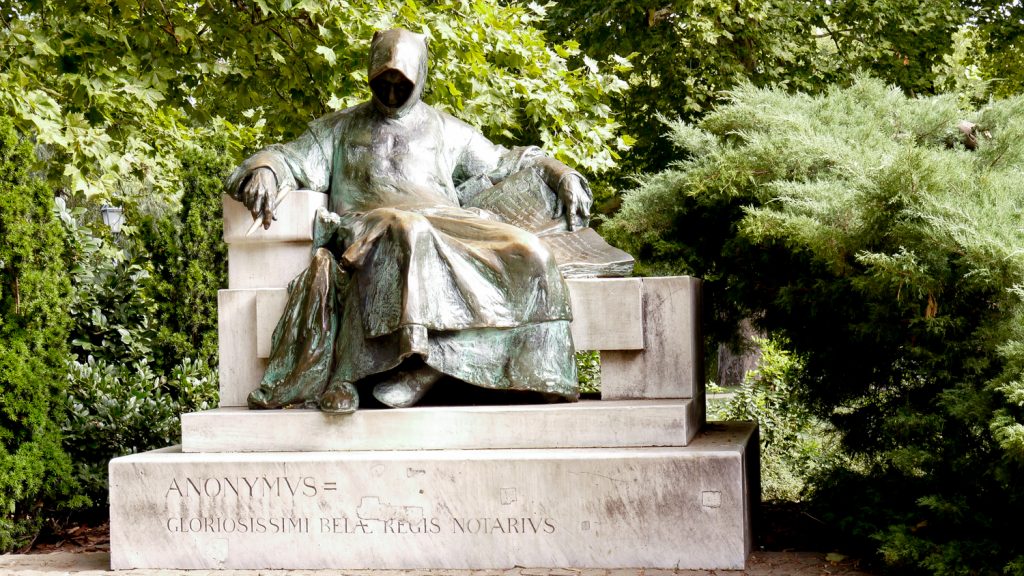 Besides all these, you can look in the nightlife of Budapest, walk the streets in the evening (Vaci street is famous for the shopping centers and Andrassy street for the spectacular buildings), visit the Ecseri flea market to look for valuable things at a cheap price.<h4>More Pictures</h4>